St. Patrick's Day is coming up and it's fun to celebrate and make Irish themed crafts with the kids. Last week I showed you how to make a crochet leprechaun-hat beer cozy. Obviously if you are making that craft with the kids you would use it on a bottle that is not full of alcohol, like a water or soda bottle instead.

Today's project is a twist on a DIY gnome I made during the holiday season. Those cute gnomes above were made with sand- filled socks and that tutorial continues to be one of my most read blog posts to date! Today's project will show you a different method of making a cute Scandinavian gnome- except this time he's an Irish leprechaun.

Supplies you may need for leprechaun gnome:

The following are affiliate links. We are a participant in the Amazon Services LLC Associates Program, an affiliate advertising program designed to provide a means for us to earn fees by linking to Amazon.com and affiliated sites. Thank you for being part of Crafty Little Gnome.

I found the leprechaun version of this craft easier than the other Christmas gnome. Using a wine bottle rather than a sand filled sock provided more stability. The nose is made from a wooden bead instead of a nylon filled with poly stuffing. The entire thing feels a little more secure.

What is a leprechaun anyways?

I think we are all familiar with leprechauns. If you are one of the 3 people on the planet who don't know about them, here ya go:

You may also like: Leprechaun Trap and free printable

Leprechauns are a type of fairy, though it's important to note that the fairies of Irish folklore were not cute pixies; they could be lustful, nasty, creatures whose magic might delight you one day and kill you the next if you displeased them (remember that old Leprechaun horror movie series?)

leprechaun legends can be traced back to eighth-century legends of water spirits called "luchorpán," meaning "small body". These sprites eventually merged with a mischievous household fairy said to haunt cellars and drink heavily.

Other researchers say that the word leprechaun may be derived from the Irish leath bhrogan, meaning shoemaker. Indeed, though leprechauns are often associated with riches and gold, each leprechaun is said to have his own pot of gold, which can be found at the end of a rainbow.

According to Irish legends, people lucky enough to find a leprechaun and capture him can barter his freedom for his pot of gold. Leprechauns are usually said to be able to grant the person three wishes. But dealing with leprechauns can be a tricky proposition. They will do just about anything to trick their capture into letting them go- and if you take your eyes off them, even for a second, they are so quick they can vanish and never return.

What is the difference between a leprechaun and a gnome?

While leprechauns are part of Irish folklore, gnomes are not. Gnomes don't necessarily have a treasure that they are protecting and don't have an obligation to anyone who captures them.

This leprechaun is make out of an old wine bottle that is covered with a sock, some wool roving and other accessories. Check out the full tutorial in the instruction card below. 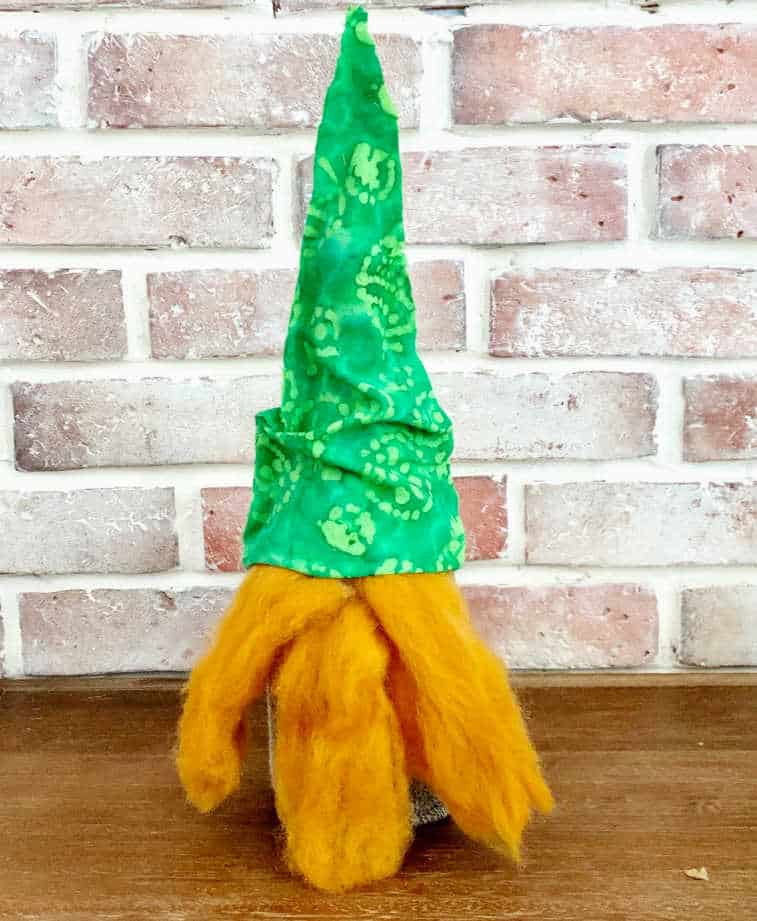 What do you think of my little leprechaun? Let me know in the comments below!

« Leprechaun Hat Beer Cozy
How to crochet the Roseanne Afghan »