Today's recipe is a special breakfast dish to whip up for your Valentine. I titled it Heart Attack on a Plate because it's high in calories, loaded with fat and should only be eaten on special occasions unless you actually want to develop heart disease. Bread is cut into the shape of hearts, dipped in egg and fried in bacon fat. The bread slices that have the hearts cut out of are then cooked in the bacon fat as well and a whole egg is fried in the center of the toast. This tasty dish is topped with jam, syrup and cinnamon sugar for a sweet and savory treat for your loved one.

Put on your stretchy pants and head to the kitchen with me to make this Heart Attack on a Plate Valentine's Day Breakfast.

Heart Attack on a Plate

We are making one of the most unhealthy, artery clogged meals I have come up with on my blog today. I'm technically on a diet (not that that has ever stopped me from indulging in treats) so I only tried a few bites. My husband on the other hand loves this breakfast meal and gives it two big thumbs up.

A heart attack on a plate is a slang term for a very unhealthy meal. Urban Dictionary defines it as: "An especially unhealthy meal, typically one that is high in saturated fat."

Ingredients you may need for a Heart Attack on a Plate:

The following are affiliate links. We are a participant in the Amazon Services LLC Associates Program, an affiliate advertising program designed to provide a means for us to earn fees by linking to Amazon.com and affiliated sites. Thank you for being part of Crafty Little Gnome

Tips for making a Heart Attack on a Plate

The full instructions are found in the recipe card at the bottom of this post, however there are three different sections to the recipe:

First, you will fry the bacon in a pan. I prefer to use a cast iron skillet. Once the bacon is cooked to perfection, set it aside- but don't drain the pan. You will use the bacon fat to fry the rest of the ingredients.

You may also like: Thin Crust Sweet Chili Pizza

Next, you will cut heart shapes out of the bread. Do you have to cut a heart shape? Of course not, you can do any shape you like but this is a Valentine's day post so I did hearts. Dip the bread hearts in a mixture of egg and milk and fry them in the bacon fat. Set aside to cool and top with strawberry jelly.

Finally, take the remainder of the bread slices with heart-centers removed and dip them into the egg batter. You are making a french-toast-style Toad in the Hole. Be careful not to rip the bread, as it is delicate. Fry them on the pan and crack an egg into the center of each of them. Flip and fry until the egg is cooked.

Assemble everything on a plate and add syrup and cinnamon sugar on top.

Enjoy and make sure you clear the rest of your schedule for the day as you may fall into a food coma.

What is a "Toad in the Hole" and where does the name come from?

A Toad in the Hole in America and England are totally different breakfast dishes.The English classic Toad in the Hole is sausage links baked in a Yorkshire pudding like flour egg batter served with onion, gravy and vegetables. In North America it is a piece of bread with the middle cut out, toasted in a pan with an egg fried in the center of.

In this recipe I made the American version,  but with a twist- I dipped the toast in egg batter before frying with the egg in the center.

Dishes like toad in the hole appeared in print as early as 1762, where it was described as a 'vulgar' name for a small piece of beef baked in a large pudding.

You may also like: Bacon wrapped burger with pineapple

Toad in the hole was originally created as a way to stretch out meat in poor households. Chefs therefore suggested using the cheapest meats in this dish.  Despite popular belief, there is no record of the dish ever being made with toad. The origin of the name is unclear, but it may refer to the way toads wait for their prey in their burrows, making their heads visible in the earth, just like the sausages peep through the batter.

Remember, if you like this recipe please rate it 5 stars! 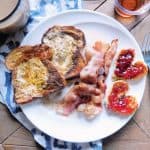